Dennis, his son Jeff, and I were off on a grand adventure to visit friends in Alaska. I was so excited about the trip because I had never been to Alaska, and it was at the top of my bucket list. It turned out to be a trip of a lifetime! 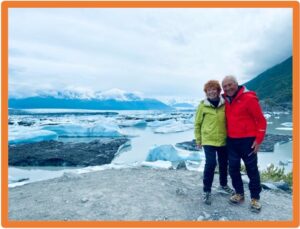 On Thursday, July 29, 2021, we boarded a United Airlines plane and flew through Denver to Anchorage, Alaska. Our friends met us at the airport and drove the 45-minute trip to their beautiful home in Palmer. We could see the Knik River nestled against the Chugach Mountains and the Knik Glacier as we looked out their massive picture window. It was shocking how big and close everything was!

The next day, Friday, we suited up with many layers of clothing, including a hat and gloves, to protect us from the cold that was soon to come. I wore scuba booties under my Keen sandals so my feet would be warm, but I could still navigate the Knik River waters.

We boarded a magnificent airboat—a flat bottom boat with a propeller in the back for momentum from a 600-horsepower engine. As soon as we took our seat, they gave us big noise-canceling headphones and a big, bulky float jacket to keep us warm, dry and safe.

Soon we were off on a grand adventure!  We were excited and cold as we sped along the 3-inch-deep water at 30 knots. The river water was clear, still and green as we drove over the top of tall grass growing in the river. We could see glaciers melting to form countless waterfalls as we looked around at the nearby mountains bordering the Knik River. 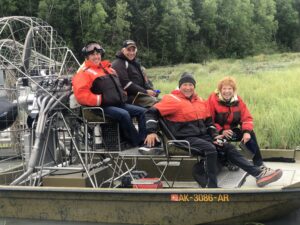 The high powered airboat ready to take off

The high powered airboat ready to take off

Speeding to the glacier.

We were headed to the Knik Glacier. The air temperature dropped dramatically as we neared the glacier and the water changed from a clear green to a dull grey and then to an ice blue. The river was no longer calm and clear—now it was opaque and choppy. We were getting colder by the minute. After a two-hour ride we finally arrived at the glacier and disembarked on wobbly legs.

We all climbed up the mountain to see the glacier and enjoyed a picnic lunch on top of a huge flat boulder. On our journey through the river. we saw several majestic eagles soaring above, a mama moose standing calmly in the river and a young moose galloping awkwardly through the forest. We were all awed by the majesty of the steep mountains and the beautiful blue glaciers. 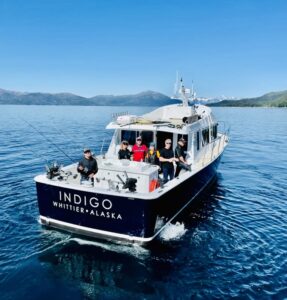 After a soothing warm shower, we packed up and drove the two hours to Whittier, a popular fishing village, where our friends house their beautiful 50-foot fishing boat named Indigo, complete with electric reels. We settled into our cozy accommodations in their beautiful home, which is right next to where the boat is stored and prepared for our fishing trip—packing the boat with food, drinks, bait, reels and all the necessary supplies.

The weather was perfect with lots of sunshine and moderate temperatures which we were told is unusual for Alaska. Off we went toward the beautiful waters of Prince William Sound to look for salmon. We could see tall spruce trees blanketing the many islands and we were thrilled to see scores of porpoises playing at our bow. This area also has lots of deer and whales, although we didn’t see any that day.

Our host was studying his many instruments to see where the salmon were plentiful. Once we found a good spot, our host baited our hooks with the carefully prepared bait and let our line down until we could feel it hit the bottom and then we reeled it up just a bit so it wouldn’t sit on the bottom.

Bam! Suddenly, I felt a big tug on my line and began to reel as fast as I could. It was hard to keep the fishing pole steady because the salmon was so big and wiggly. But with the help of our friends, I hauled up a beautiful silver salmon. 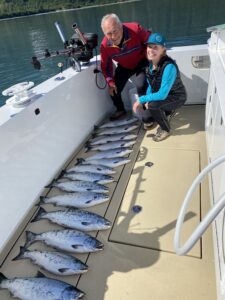 We quickly learned the drill: when you catch a fish and bring it up someone with a net scoops it up from the end of your line, then someone else uses a hard plastic hammer to bonk it on the head so it doesn’t wriggle free and then they put it in a special chilled compartment to save until it’s time to clean it.

I caught four beautiful silver salmon and Dennis and Jeff each caught three. Now it was time to move to a different spot, yielding exciting drama on the high seas.

A friend of our host known as Crazy Ray called on the Indigo’s CB radio to tell us about a spot with plentiful salmon. But he couldn’t tell us over the radio for fear that other fishing boats would hear. So, our host called Crazy Ray on his cell phone to discuss the secret spot.

We kept watching to make sure other boats weren’t following us as we headed toward the special area. That area did indeed yield lots of beautiful silver salmon. By the end of the day, we caught 14 salmon along with several rock fish which we always threw back.

We tried to catch some halibut, which live at a depth of 1,500 feet, but we didn’t have any luck with that. Still, it was fascinating to see the preparations for halibut fishing—the poles and reels are a lot larger since the fish are over 100 pounds, the bait is much larger and they drop a chum basket from the bow to attract the fish.

We had so much fun on Saturday that we went out Sunday for a second day of fishing in the glorious Prince William Sound. We only caught four or five salmon, but it was still very enjoyable. 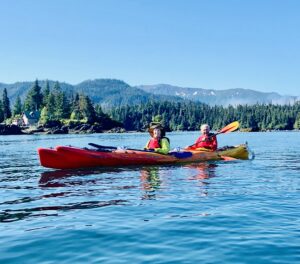 The next day, Monday, Dennis and I loaded our suitcases into the Chevrolet Super Sport that our friends lent us and bid farewell. We arrived at Lands End on the bottom of the Homer spit after driving nearly four hours of driving. It was so much fun to drive that Chevy SS because it had so much power and there were lots of open roads to drive as fast as we wanted to.

On Tuesday, we arranged to rent a kayak to paddle on Kachemak Bay. A tiny, rickety shuttle boat ferried us the 20 minutes to the other side of the bay to get our kayaks. Our guide gave us a short lesson in navigating the tandem kayak with the pedals that control the rudder and then we were off.

We were in awe as we paddled through the deep blue calm waters watching the watching the majestic eagles fly overhead and admiring the snow-capped Kenai Mountain range. This was truly like being in the middle of a travel brochure about Alaska. This was just as I had imagined it would be—but so much more thrilling to be there in person. 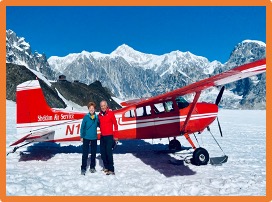 Our airplane landed on Denali glacier

We drove the six hours north to Talkeetna after spending two nights in the charming little town of Homer. Talkeetna is a quaint fishing village nestled near the bottom of North America’s biggest mountain, Denali (formerly known as Mount McKinley). Of course, the original name was in honor of President McKinley, but President Obama changed the name to Denali because that is what the native people call it.

There are three impressive mountains next to each other: Foraker at 17,400 feet elevation, Hunter at 14,500, and Denali soars to 20,300 feet. The locals say that there are only a few days each year when they can see the top because of the persistent cloud cover. We were lucky to see the top of Denali both days we were there.

About 1,200 people each year attempt the climb to the top of Denali and several die during the descent. This incredible mountain has the quickest elevation increase in the world. In 20 miles the elevation goes from 300 feet to over 20,000.

We hired a pilot to fly us in his Cessna 180 up to Denali. We wanted to see it up close but weren’t ready for a climb. It was so thrilling to fly above the rivers and forests toward this towering mountain.

After about an hour or so we landed on Ruth Glacier which sits atop 3,000 feet of ice at 5,600 feet elevation. We hiked through the snow-covered glacier exploring the various outcroppings of rock. What a thrilling trip that was!

We enjoyed this charming little town for the rest of the day and drove a couple of hours to Palmer where we returned the spunky car to our friends and prepared to leave for home the next day.

Our trip was packed full of fun adventures and breathtaking scenery. Our hosts are excellent chefs, so we had many scrumptious meals including their own halibut and salmon as well as smoked salmon dip. It was definitely a trip of a lifetime!